As I have blogged about before, Peer Instruction (PI) users continue to express curiosity about whether PI can be used in small classes. Peer Instruction Network members(PINm) such as Hank, who teaches physics at Sweet Briar College in classes sometimes less than 10 students and Rich who teaches management at Bryant and Stratton college and is restricted to classrooms that seat only 17 students, want to know about PI’s effectiveness with smaller enrollments.

John at UMBC says, “we are still exploring and promoting PI, along with other active learning pedagogies.. It would be useful to know more about PI used in Humanities and Social Sciences..” Same from Paulo at the University of Portugal–he wants tips for applying PI in the social sciences.

In a fantastic post this week on his blog Casting out Nines, Robert Talbert posted a screen shot showing “what peer instruction can do,” which he pulled from his Calculus 2 class where he is using Learning Catalytics.

Inspired by Talbert’s post and in response to questions about class size, student level, and subject matter, on TTYN this week, I write about a real question and its data from a small, graduate-level class on educational theory at the University of Texas at Austin, where I recently guest lectured.

The topic for this guest lecture was the educational value of diversity theory, which in its simplest form explains that diverse educational environments are often linked to positive student outcomes. Before class, I asked students to warm up by doing an online reading assignment. I assigned a 91 page book chapter called The Educational Value of Diversity in the book Defending Diversity. Sixteen of the 17 students in the class responded to the Just-in-Time Teaching (JiTT) questions, all short answer. My feedback question read:

What aspects of the Gurin reading did you find complicated, confusing, or difficult? Did anything stand out as particularly thought provoking or illuminating? What questions do you have about the Educational Value of Diversity Theory?

Before I even reviewed the students JiTT responses, I had a hunch that the concept of judicial review, which is introduced in the reading, was going to be a tough one for students. That’s because when I was a doctoral student studying this very theory, that concept was tough for me and my peers who weren’t lawyers. In addition, in my years of teaching a course called Theories of Diversity at Teachers College, Columbia University, I had built up intuition that judicial review was not only a tricky concept for most students, but also an important one to understanding the history behind the educational value of diversity theory. (I won’t go into the details here on how or why judicial review has anything to do with diversity or educational theory other than to say that the educational value of diversity theory was used as the primary legal argument in the University of Michigan Affirmative Action cases, and as such, the theory played a prominent role in the judicial review process.)

I prepared the below question on Learning Catalytics (LC). My intention was to create a critical thinking type question, which Derek Bruff describes in Teaching with Classroom Response Systems as “questions [that] require students to analyze relationships among multiple concepts or make evaluations based on particular criteria.” The Round 1 vote hit the PI sweet spot of 30%-70% correctness. And I used LC to direct students to specific neighbors (versus letting them simply turn to the person on their left or right).

When I wrote the question, I envisioned students engaging in some conversation about the judicial review process and using key terms related to judicial review to support their arguments that would lead them to see that indeed, under special circumstances laws can “violate” the Constitution.

In reality, as I walked around listening to students during PI, I heard them giving solid, real-life examples and scenarios where laws or polices do appear to violate individual rights. I witnessed a lot of “Ah hah!” moments among the first set of students who originally had not selected B. Students were using teacher-like gestures and appeared to be looking up text in the assigned chapter. I also heard some passionate debate over what the term “violate” means. In Round 2 of voting, there was a 25% increase in the answer I wanted students to select.

Here is the Round 1 and Round 2 Screen Shot from LC:

Listening to students led me to realize that I definitely could have posed the question better (for example by using the word conflict instead of violate) and I will improve the question next time. Yet, I also realized that the question was still effective at 1) engaging students in critical thinking about the subject matter, as they supported their arguments with evidence from their readings and their own life perspectives and 2) LC measured a positive shift in student response toward the answer I was looking for.

In addition, by looking at the screen shot of the seat maps in LC for this question, you can see that students who originally had the incorrect answer or who were unsure changed their answer after talking to their neighbor. 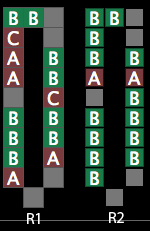 The screen shots and my observational experience listening to students’ conversations reiterates the point from last week’s post that although writing effective questions weighs a lot on our minds, even using a question that I could definitely improve upon, Peer Instruction still worked its magic…in a small class room, with only 16 students, all at the graduate level, in the social sciences to boot.

What do you think? Cancel reply

Julie Schell is Director of OnRamps, an innovative dual-enrollment program at The University of Texas at Austin. She is also an Assistant Clinical Professor in the College of Education, where she teaches on Technology and Innovation. Julie is on the Board of Directors of the Flipped Learning Network and continues driving innovative pedagogy as a member of the Mazur Group at Harvard University. Read more about Julie at www.julieschell.com.

Next Door Innovator is a series on educational innovation inspired by Deborah Solomon's New York Times column, Questions For. We engage in short conversations with educators, students, and others to gain their insights about relevant topics. The series moderator is Julie Schell.

ABOUT THE NEIGHBORHOOD
In The Neighborhood blog post series, Turn To Your Neighbor invites innovative educators from around the globe to discuss a variety of education topics.

Featured Post – 2 most powerful tips for flipping your class

Turn to You Neighbor RSS Feed